For 16 days in September 2003, I had the privilege of traveling to Africa to shoot wildlife and indigenous cultures in Kenya with seven other Seattle-based photographers. We photographed primarily in three locations: the great Maasai Mara game reserve which forms the northern border of the Serengeti and is the home of the annual Great Migration; the beautiful Lake Nakuru National Park, famous for its millions of migrating flamingos and majestic leopards; and the hot, arid twin reserves of Samburu and Buffalo Springs, in Kenya’s dry Northern Game Country.

Note: for an immersive look at the native people of Kenya, see my gallery The Maasai and Samburu

Digital photography was still relatively new then and working with digital media and batteries in remote locations presented unique challenges. I wrote the following for my original web site about my experiences on the trip, and it is reproduced here unchanged.

For more than a century, European and American travelers have come to Africa to track Kenya’s game–and originally to slaughter it in great numbers. Hunting was banned in Kenya in 1977, and today, except for the scourge of poaching, the worst “big gun” that animals have to face is the 500 or 600 millimeter lens. For photographers, the thrill of encountering big game animals in the wild is hard to surpass. Holy spotted cat! This astonishing sight occurred in the Maasai Mara game reserve. Cheetah are becoming increasingly endangered through loss of habitat, but in the game reserves they have adapted somewhat to the presence of humans. Fortunately, both this photographer (not part of our group) and the two cats parted company in good health. Canon EOS-10D, EF 300 f/2.8L IS

Our trip was organized through a smaller, custom tour company (East African Ornithological Safaris, Ltd.) that is used to working with photographers. Instead of the ubiquitous 7- or 9-seat white minivans that carry most tourists around the game parks, we traveled in customized Land Rovers, four photographers to a vehicle. Our drivers were willing to position the vehicles to obtain the best light, and to stay with a group of animals for as long as the photographic situation warranted. If you are traveling with a larger, more casual group of tourists, you will not be able to obtain this level of cooperation.

We stayed mostly in tented camps, which capture some of the flavor of safaris of a century ago. Instead of permanent structures, your sleeping quarters and sometimes even the camp dining room and reservation office are housed in canvas tents. Ironically, by far the most dangerous part of doing a safari in Kenya is driving from place to place! Driving in Kenya is a risky business, both for the occupants of vehicles and for the thousands of people who seem to walk everywhere along the sides of the roads. Even major arteries are in a bad state of repair, potholes abound, and places to make repairs are very scarce. It also doesn’t help that the strategy of many drivers in the face of an impending collision seems to be to accelerate even faster! 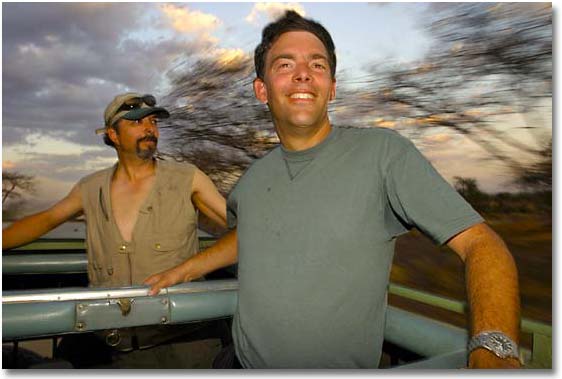 Our tour leaders were the well-known nature photographer Art Wolfe and his long-time partner Gavriel Jecan, an excellent photographer in his own right. Between them, Art and Gavriel have made dozens of trips to Africa, and we all greatly benefited from their skill and insight. Other members of the group included wildlife biologist Greg Green, Western Washington University professor David Sattler, Seattle public defender Burns Petersen, and two Microsoft employees: advanced technology researcher Brian Meyers, and Douglas Hebenthal, director of quality assurance for Xbox. Though they all have serious “day jobs,” all are accomplished photographers and proved to be excellent travel companions. 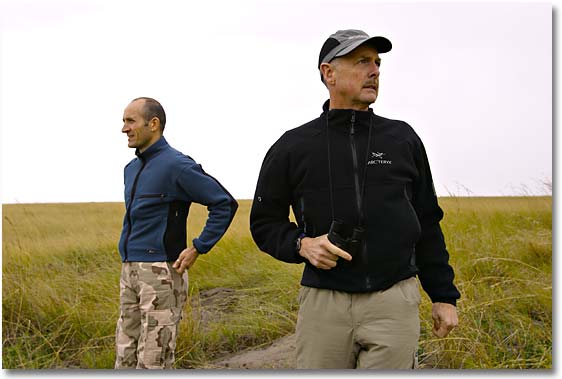 Shooting Digital in the Third World

Shooting digital in a third-world country over an extended period of time still presents some unique challenges; preparation and planning are essential.

As on my recent trip to Yellowstone, the group was split between those photographers shooting film and those shooting digital. This time, however, the journey was much longer and to a far more remote location. While in Africa I made over 5500 digital captures (the equivalent of 152 rolls of film!), which resulted in nearly 40 gigabytes of RAW image files. All this required careful contingency planning: even if you had a laptop big enough to store all the data, what happens if it breaks, or your hard disk fails? In Africa you can’t just drive over to the nearest CompUSA and pick up a spare.

As I was planning to shoot RAW, not JPEG, I realized that I would have a huge amount of data to manage. I decided to forego the idea of processing the images in the field. (When converted to 16-bit TIFF format, the Canon EOS-10D produces 36Mb files, and my current laptop has only a 20Gb disk drive.) Instead, I elected to bring two large-capacity portable storage devices, 80Gb Trippers, one as primary storage and one as backup. These devices are 3-in-1 solutions: battery-powered “digital wallets” for image downloads sans computer, and when connected to the computer, high-speed USB 2.0 portable hard disks and compact flash card readers. I stored all images on the Trippers and waited to “process” them when I returned to Seattle. I used the computer only to review RAW images stored on the Tripper and to show a few slide shows created by extracting embedded JPEG images from the Canon RAW files. 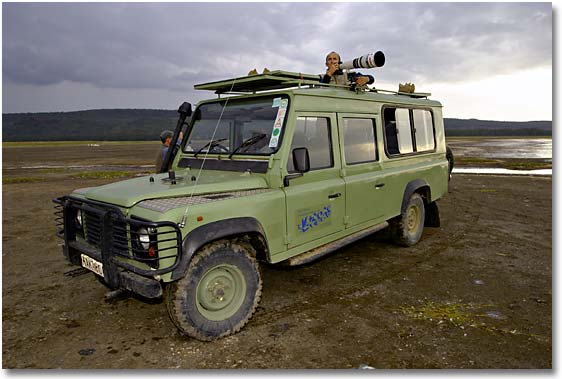 My workflow then was this: on each morning and evening game drive I carried two bodies and four 1Gb flash cards. Each 1Gb card will hold about 155 RAW image files from the Canon, or a little over 4 rolls of film. The equivalent of 16-17 rolls was plenty of capacity for each half-day shoot. Even so, I carried both Trippers just in case I needed to download a card in the field.

Each card would get independently download to each Tripper before it was erased and reused. That way, I was protected in case either one of the hard disks failed. Often, if it was not too dusty, I would have all my cards downloaded before we even returned to camp. While other photographers were busy setting up their laptops, I was often sipping a Coke on the veranda. Daniel, a Maasai, was one of the Conservation Corps Africa (CCA) drivers working with us in the Maasai Mara, Kenya. Most local people have both English and native Kenyan names. EOS-10D, EF 16-35 f/2.8L, 550EX.

One important issue when working in remote areas of Kenya is electricity. In the camps, electricity is almost always provided by a generator, and sometimes by solar power. The generators are only run at certain times of day, and you need to make sure you can go out each morning with freshly charged batteries. Before you leave you also must verify that your chargers can handle the 240 volt, 50 cycle local current and bring British-style plug adapters. I recommend also bringing a cheap, non-surge protected (so it doesn’t blow out from the high voltage) power strip so that you can share the scarce electrical outlets with others. Another strategy is to bring a quality power-inverter for use in the vehicle. This allows you to charge batteries while in the car, where you are much of the day. Of course, as with computers and storage devices, you must bring redundant battery chargers in case one fails during the trip. Choosing products having small, lightweight chargers is a bonus! 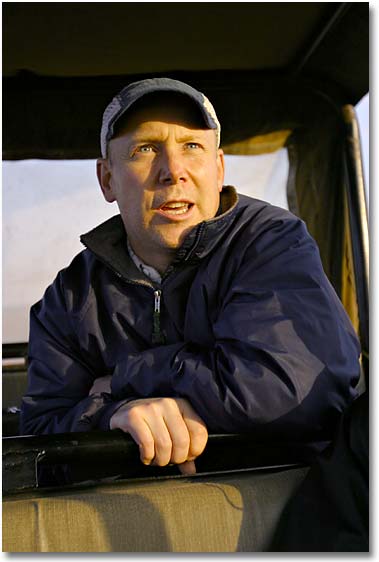 Kenya is one of the largest countries in East Africa and is a beautiful place with warm and friendly people. Jambo, the Swahili word for hello, is the universal greeting of Kenyans, and is invariably accompanied by a flashing smile. Though the national language is Swahili, English is spoken broadly as a result of Kenya’s status as a member of the British Commonwealth. The Kenyan government is (mostly) democratic and has close relations with the United States and Europe. However, some places like Nairobi have seen a decline in the past decade, leading one to conclude that Kenya’s people have suffered greatly from corruption during the previous administration of Daniel Arap Moi. However, the newly elected administration has pledged to restore fairness to public policy and there is a genuine sense of hopefulness among the Kenyans I spoke to.

While it is relatively easy for Westerners to travel in Kenya, poverty is widespread, and one can become overwhelmed by street beggars and others who earn their livelihood from unwary tourists. I recommend always using the services of a reputable tour company, such as East African Ornithological Safaris, Ltd. They will provide knowledgeable drivers, accommodations adhering to western standards of comfort, and assistance in moving about the country safely.

In Kenya we photographed wildlife primarily in three locations: the great Maasai Mara reserve, which borders the Serengeti and is the home the annual Great Migration; the beautiful Lake Nakuru National Park, famous for its millions of migrating flamingos, located near the center of Kenya’s Great Rift Valley; and the hot, arid twin reserves of Samburu and Buffalo Springs in the dry Northern Game Country. 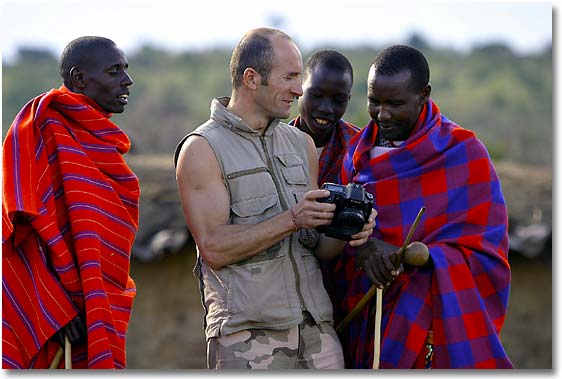 While in the Mara and in Samburu we also had the distinction of being able to visit and photograph the people in authentic Maasai and Samburu menyattas, or villages, where the traditional way of life is still practiced. I made some wonderful photographs in both locations and learned to respect the ability of these people to hold onto their culture while simultaneously pursuing opportunity for their young people in modern Kenya.

The Coastal Brown Bears of Alaska
Scroll to top