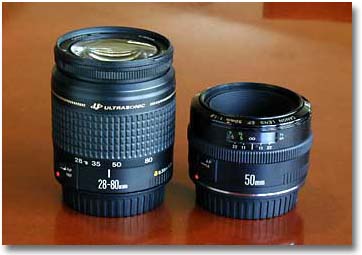 So, there you are, the proud parents of a beautiful new baby, and you can hardly contain your excitement as you unwrap that new 35mm camera kit you bought to document your child’s early years. Although you’ve had a point-and-shoot camera for a while, you wanted to step up to a “real” camera for the kind of quality pictures you see in the popular media and in the camera maker’s brochures. You fumble a little as you mount the 28-80 zoom lens and load the film, but pretty soon everything is ready to go.

As your spouse proudly holds the baby up you raise the camera to your eye. The viewfinder seems a little dim in the room light, but hoping for the best, you gently squeeze the shutter release and…

Wait… while the auto focus system hunts, the built-in flash pops up and charges, the “red eye reduction” feature fires a series of strobe bursts into your subject’s face, until—finally—the camera takes the picture. Of course, by then your spouse’s’ smile has faded, the baby has gotten fussy, and the resulting pictures have that deer-in-the-headlights (flash on camera) look you so wanted to avoid…

What’s wrong with this picture? Well, in part it’s the lens you were using.

If you are like most photographers just starting out with a new 35mm SLR, chances are it came with one of those ubiquitous 28-80mm (or similar) “consumer” zooms. In recent decades these inexpensive lenses have all but replaced the traditional 50mm prime lens as the starter optic. The 50mm lens, once the mainstay of 35mm photography, has been all but forgotten by today’s photographers. 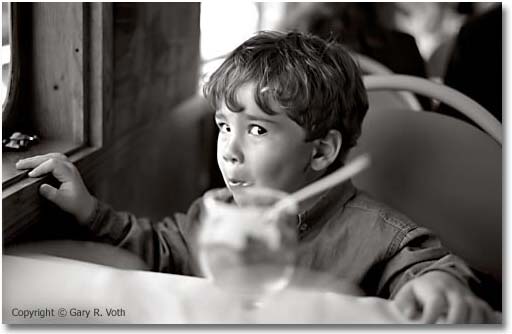 Of course, people like zoom lenses. They’re convenient and their drawbacks are not readily apparent in casual use. Consumer zoom lenses definitely have their places, for example in vacation and travel photography, much of which takes place out of doors. However, I’m convinced they make poor choices for many beginning SLR users who are motivated by the idea of taking high quality pictures of their kids and family.

Beyond their sometimes-dubious optical performance, my major criticism of these lenses is their slow speed. Many of the world’s most evocative and best-known images were made under natural light with fast lenses and film. Creating such images is nearly impossible with “slow” zoom lenses, which are harder to focus and inadequate for use indoors without flash. Nor can they easily render backgrounds out of focus. In fact, the technical limitations of these lenses tend to lead to the kind of snapshots that the photographer presumably bought an SLR to avoid.

A Renewed Appreciation of the “Normal” Lens

So, what is the alternative? Well, you could do what most of today’s pros and some ambitious amateur photographers do and buy a “professional” 24-70mm zoom lens with a fixed f/2.8 aperture. These lenses are reasonably fast, quite sharp and well made. But they are heavy, bulky and very expensive. For many people I believe there is a better alternative: the classic 50mm “normal” lens. 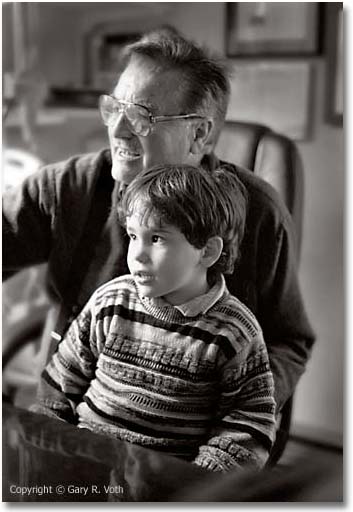 The 50mm lens is called a “normal” or “standard” lens because the way it renders perspective closely matches that of the human eye. This is the lens that likely would have come with your camera had you bought it 25-30 years ago. Images made with a 50mm lens have a natural and uncontrived look.

Before falling to its current level of disfavor, the 50mm lens had a long and distinguished pedigree. For many years the defining documentary instrument of the 20th century was the small format rangefinder camera (Leica, Contax, Nikon, Canon) with 50mm lens. Some of the world’s best-known photographers such as Henri Cartier-Bresson and Ralph Gibson made virtually their entire careers with this combination. With the advent of the “wide angle” Leica M2 and the rise of the SLR camera with its broad range of focal lengths, the 50mm lens began to fall out of favor among professional users. (I hardly ever used a 50mm lens early in my career.) Today’s working pros mostly eschew prime lenses for the high-speed f/2.8 “professional” zooms.

However, the 50mm prime lens has a great deal to recommend it., particularly as an alternative to the ubiquitous “consumer” zoom.

It delivers a very natural, unforced perspective, and its high speed renders it much more suitable for available light photography. Versions are available that are affordable enough for most anyone to use. Compared to the typical f/3.5-5.6 zoom, the 50mm prime lens has the following benefits: 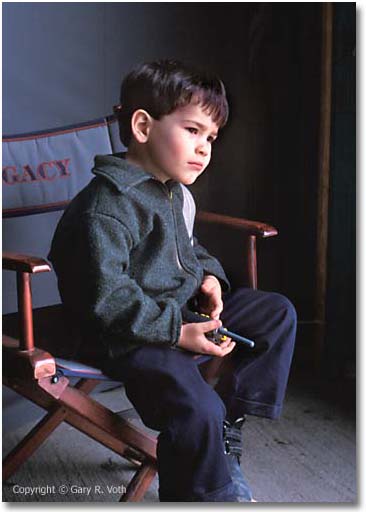 Issues When Shooting with a Fast Lens

Accurate focus is essential when shooting with a fast lens at wide apertures. The wider the aperture the shallower the depth of field (or zone of apparent sharpness) in the photograph. You will need to learn to use the AF system of your camera to make sure the area you want is sharp (for example, your subject’s eyes) even if it is not in the center of the frame. Usually this is done by first locking in an auto focus setting, then recomposing. However, with fast moving subjects you may not have the time to do this. If your camera has multiple focusing points, you can try selecting one and keeping it over your area of critical focus. Or you may want to experiment with use of manual focus (which I do quite a bit). In any case, expect that a percentage of images will be rejected due to soft focus. Don’t worry, this happens even to professionals; with practice your averages will improve. 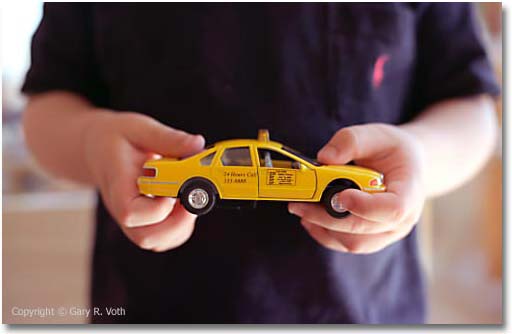 Another issue is camera automation. If your camera has a built-in flash and “easy” shooting modes (such as “portrait,” “action” and “landscape”) it may beep at you in some dim lighting conditions and pop up the flash or even refuse to take a picture. Your best bet is to put the camera into a more flexible auto exposure mode, such as aperture priority (Av or A). Generally, in this mode the camera will assume you know what you are doing and permit a shutter speed that might cause camera shake. (I have made sharp images with a 50mm lens as slow as 1/15th second by bracing myself against a wall or door frame.) Program (P) mode is okay too, provided the camera will permit a slower shutter speed without flash.

Getting the Most From a 50mm Lens

The 50mm lens is unique in that it can produce images that, under the right conditions, seem to have a modest wide-angle perspective, and under other conditions have the isolation of a short telephoto lens. Thus, it is a very versatile companion for many kinds of photography. When using a zoom lens, you often stand still and twist the zoom ring until you find a composition that works, a lazy approach at best. When using a prime lens, you will learn to “zoom with your feet,” getting closer to your subject to eliminate distracting background or backing away to include more context.

I believe this is good training in learning to see effectively with the camera. When using prime lenses, you become more aware of the viewfinder as a compositional frame, and the various effects that a change of focal length provides. In fact, after using prime lenses for a while, the pictures you make with your zoom lens will improve, as you will have a better understanding of how focal length affects composition.

Who knows, after working with a “classic” 50mm lens, you might even (horrors!) experiment with manual focus or learn how to meter the scene manually. Getting back to basics and learning how to gain back control from the camera can be one of the more rewarding aspects of improving your photographic skills.

Which Lens Should I Buy? 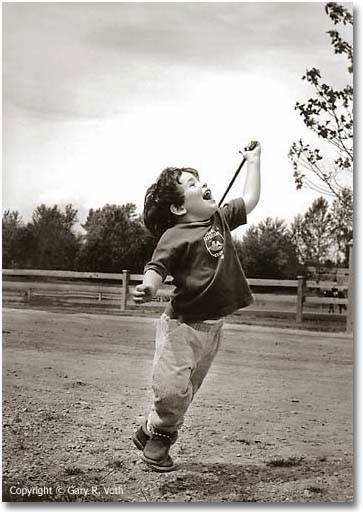 50mm prime lenses come in a breathtaking range of speeds, focusing options, and prices. Canon, for example, offers the EF 50mm f/1.8 II for about $75 street, while the EF 50mm f/1.0L is almost $3,000! Other makers continue to offer both autofocus and manual focus versions in various speeds. There are even 50mm macro lenses that can be substituted for a standard lens, but these lenses usually have smaller maximum apertures that mitigates their advantages over a zoom.

If you can afford it, the best combination of speed and performance is usually found among the manufacturers’ 50mm f/1.4 offerings. These lenses can be used in very low light, are usually quite well made, and can cost several hundred dollars or more. However, if you are just starting out or are on a budget, my recommendation is to look into your camera maker’s entry level 50mm lens. These lenses, with maximum apertures of f/1.8, are 2/3 stop slower than the f/1.4 lenses, but still very fast compared to a zoom. You can obtain 90% of the benefits of the f/1.4 lenses at only 1/3 to 1/4 the price (usually under $100). Be aware, however, that some of these lenses are more cheaply constructed, possibly with plastic lens mounts.

Since this article was originally published, third party lens makers such as Sigma, Tokina, Tamron and Zeiss have stepped in to offer a wide range of fast prime lenses in many different lens mounts, so it worth looking at alternatives to your camera maker’s lenses too.

What If I Don’t Have a Full Frame Camera?

Many interchangeable lenses digital cameras have sensors that are smaller than a traditional 35mm film frame. The most popular format, APS-C, has a sensor size roughly 40% of full frame. Images made with these cameras are cropped from the center of what would be a full frame image if shot on film. This produces a “focal length multiplier”, typically 1.5x (Nikon, Sony) or 1.6x (Canon). For example, a 50mm lens on a Canon EOS M renders an image equivalent to an 80mm short telephoto lens on a film body. A few vendors including Olympus and Panasonic have adopted the so-called “Four Thirds” format which is smaller yet, producing a 2x multiplier.

While a 50mm lens on these cameras is still quite useful, particularly for candid portraits, the focal length that best equates to a “normal” lens on these cameras is 35mm. Most vendors produce reasonably fast 35mm f/2.0 autofocus lenses that can be used a normal lens on crop cameras. Some manufacturers now offer purpose-built “50mm equivalent” lenses for their crop sensor models. Canon, for example, sells the Canon EF-M 32mm f/1.4 STM for its M system, and Nikon has the AF-S DX NIKKOR 35mm f/1.8 for digital SLRs.

If you are considering a new camera purchase or already have a camera and would like to make pictures of your family that don’t look like snapshots, consider buying a classic 50mm “normal” lens instead of (or in addition to) that “consumer” zoom. This 50mm lens will allow you to make pictures in natural light without flash that share at least some of the qualities of the very finest photographs ever made. As with any new equipment, you will have a learning curve as you figure out how to use the focal length compositionally and achieve good focus. But you may find that pictures of your friends and family begin to exhibit a much more natural and evocative quality.

All of the example photographs of my family on this page were made with a classic 50mm lens. I hope they inspire you to make similar pictures of your own loved ones.