If there can be said to be any “legendary” lenses in contemporary 35mm photography, the Leica Noctilux must surely be one of them. (Editor’s note: Since this article was written, Leica has released a new 50mm Noctilux with an even faster f/0.95 maximum aperture. This article applies only to the older, now discontinued lens.) 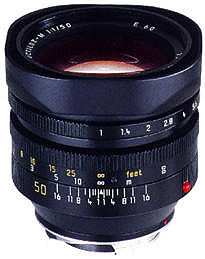 The Leica 50mm f/1.0 Noctilux-M has the distinction of being the fastest production lens available for general purpose photography. Since its introduction, the Noctilux has amassed a cult following among the cognoscenti of “available darkness” photography. This no doubt has to do with the inherent qualities of the Noctilux itself, but I suspect the strengths of the Leica M as a low-light photographic tool play a significant part.

The Leica M is a classic 35mm rangefinder camera. Because it does not have the bulky mirror or built-in motor common to SLRs, it is extremely quiet and unobtrusive in use. (While as of this writing no digital M-series camera is available from Leica, a digital rangefinder model that accepts M-mount lenses is the Epson R-D1s.) In the hands of a practiced user, a rangefinder camera can be focused more easily in low light than can an SLR, even one with a modern AF system. It can also generally be used hand-held at significantly slower shutter speeds. (This is due to the lack of a vibration-inducing instant-return mirror, but also to the excellent ergonomics of the Leica M camera.)

When you add the light-gulping abilities of the Noctilux’s f/1.0 maximum aperture to these benefits, you obtain a unique system for hand-held, available light photography. 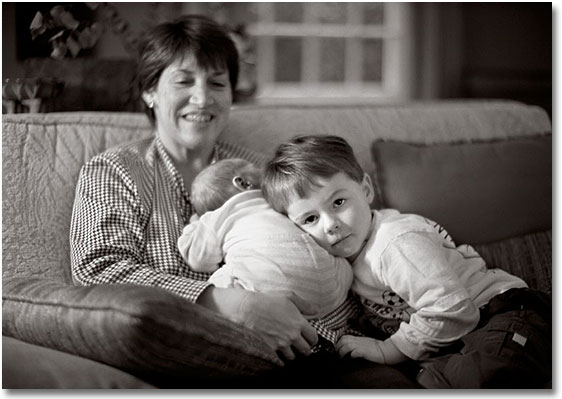 The Noctilux name is famous, dating back to the original f/1.2 lens with aspherical surfaces introduced in 1966, the first such lens to be commercially produced. I have never used the original Noctilux, but it was reputed to be at its best wide open, which would have made it a specialized lens indeed.

The current f/1.0 Noctilux was designed in Canada and first introduced in 1976. This lens, now using all spherical glass elements, is a better performer at smaller apertures while retaining its special characteristics wide open. Leica has offered this design over the years in two or three different barrel configurations. The current barrel style was introduced in 1994, uses E60 filters and has a pull-out lens shade. As far as I know, this lens is still manufactured exclusively in Canada.

The Noctilux is big and heavy by Leica M standards. It weighs some 630 grams, or more than the M7 camera body. It also has the biggest exterior circumference of any M lens, which creates some modest viewfinder blackout in the lower right corner. That being said, the lens is well balanced on the camera, and the combination of M body and lens is still petite compared to a top-end 35mm reflex camera and high-speed lens. (Compared to the Canon, for example, the Noctilux is positively svelte.)

My sample has very smooth controls. The aperture ring is silky. Focus is a bit on the tight side, though no more so than some other M lenses; but it is smooth and well damped. Focus travel (the amount of rotation necessary to move from infinity to close focus) is a bit longer than with other Leica lenses; roughly double that of the 50mm Summicron. This makes the Noctilux slower in making gross focus adjustments, but more positive with fine focus adjustments, a welcome trade-off for large aperture shooting. The built-in lens shade is less successful; on my sample the shade is a bit too loose, and sometimes fails to remain extended in use.

Minimum focus on the Noctilux is just 1 meter, compared to 0.7 meter for the current Summicron and Summilux. However, it’s not clear to me that the Leica rangefinder would be accurate enough to focus this lens at any distance closer than 1 meter at f/1.0. Focusing at more normal working distances at f/1.0 is hard enough. (There is also the problem of field curvature, of which more anon.)

Optically, the Noctilux is a unique performer. I have found that while it does not resolve the very finest details as well as Leica’s slower 50mm offerings, it can nevertheless produce very fine results. The Noctilux has a certain unmistakable optical fingerprint. It seems to produce images with slightly lower contrast than Leica is famous for, but this becomes beneficial in “available darkness” shooting, where the light is often highly directional and of extreme contrast (think for example of streetlamp illumination). The Noctilux seems to “see into” the shadows in a way that other lenses have a hard time doing. And at f/1.0 it allows photography in only half the light level possible with an f/1.4 lens. 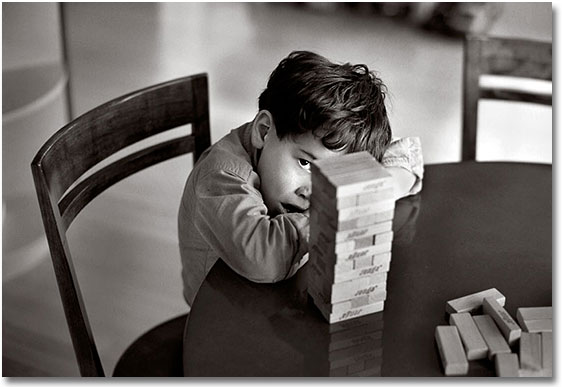 There is very noticeable light falloff, or vignetting, at the edges of the frame at f/1.0. This improves somewhat at f/1.4 and is greatly diminished by f/2.0. In practice this is not a big issue since the quality of light in “available darkness” situations is often uneven. The vignetting can even be used to advantage to produce a subtle artistic effect. In good light, full frame images made at f/1.0 can have an ethereal, beautiful quality that reminds me of images made with pinhole camera (albeit at a lot greater expense!). At f/2.0 and smaller apertures, the Noctilux produces images which are similar in character to those of other 50mm lenses.

Focusing With the Noctilux

Perhaps the biggest hurdle you must overcome when using the Noctilux is achieving accurate focus. At closer distances, depth of field at f/1.0 is so minimal that anything in less than perfect focus will be soft. Consequently, accurate focus is essential.

However, perhaps because of its spherical design, the Noctilux is known to exhibit more field curvature at wide apertures than high-speed designs that incorporate aspherical elements. (Field curvature will cause the center of the image to be focused in a different plane than the edges.) Moreover, field curvature may change based on focusing distance and the aperture used. This problem is especially acute for rangefinder lenses, as focus is achieved via a mechanical linkage between lens and rangefinder, and not by viewing the actual image on a ground glass screen. Which begs the question: for what average distance and aperture do the designers optimize the position of focusing cam? I can’t say for certain how the Leica engineers have solved this problem, but I do know that the Noctilux is considered to be a “better” performer at medium distances than close up. This may be at least partially due to focus shift caused by field curvature.

Despite all this, it is possible to make sharp, well-focused images at nearer distances, as you can see from some of the samples on this page. 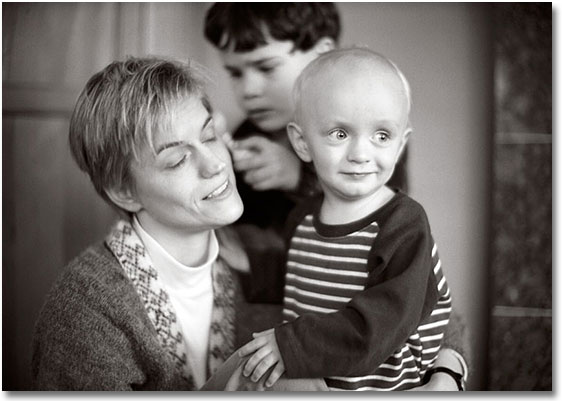 Because I wear eyeglasses, I prefer shooting with the .58x viewfinder on the M6. This “wide angle” viewfinder is the only one that allows me to comfortably see the entire 35mm bright line frame and surrounding area when composing. However, with an effective rangefinder baseline length of just 40.2 mm, it provides less accurate focusing with longer and faster lenses than other Leica bodies. (However, it should be stated that the focusing of this camera is still accurate enough for all lenses save the 135.)

What to do? Well, Leica offers the M7 and MP with three different viewfinder magnifications: .58x, .72x, and .85x. Most photographers do fine with the the classic .72x viewfinder. However, the .85x viewfinder has an effective baseline length of 59.1 mm, more suitable for focusing longer and faster lenses such as the Noctilux. If you find yourself using 50mm and longer lenses on the Leica a lot, this camera might be a better choice for you. Or you can investigate Leica’s new viewfinder magnifier, a handy accessory that can be screwed onto the eyepiece to provide increased magnification for composing and focusing with longer lenses. 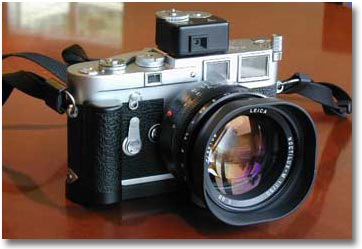 However, the classic Leica M3 camera (right) may be the best choice when shooting with the Noctilux. The M3 was the original M camera and has a different viewing system than the M2 and later models (the 50mm frame is permanently etched in the viewfinder). Its viewfinder magnification of .91x is the highest of any Leica M, giving an almost life-size image. The greater magnification means the M3 has the longest baseline length (at 63 mm) of any M body, so there is at least a theoretical advantage in focusing accuracy. But there seems to be a qualitative difference as well: the M3 for me is by far the easiest camera to focus in difficult light. The rangefinder patch on the M6 sometimes loses contrast or “flares” in difficult light or when you do not keep your eye perfectly centered behind the eyepiece. The M3 rangefinder does not suffer from this so much. It’s a great design that has stood the test of time, and it seems very well matched with the Noctilux.

I won’t pretend to be an optical scientist and discourse on the theoretical underpinnings of Noctilux performance. There are other places on the Web for that (see Erwin Puts’ review here.) I just know what I like. Is the Noctilux for everybody? In a word, no. If you are a Leica shooter looking for the best balance of sharpness and contrast with very good low light performance, then I’d steer you to the Leica Summilux-M. Or for general photography, the classic 50mm f/2.0 Summicron-M is hard to beat (some Leicaphiles consider to be the finest standard lens in the world). If, however, you are a connoisseur of high-speed optics and find yourself with many opportunities for such a lens, then the Noctilux may be worth having. This is particularly true if you own it in combination with another 50mm lens such as the Summicron or the Tri-Elmar for more general work in better light.